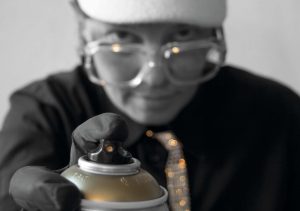 The latest work by Berlin-based artist annette hollywood is an offensive response to the music video Picasso Baby: A Performance Art Film by the commercially successful rapper Jay-Z. At the centre is the ‘response song’ Bigasso Baby, with which hollywood attacks Jay-Z’s rap Picasso Baby in battle style and responds directly to the icons of wealth conjured up by him and his idea of art as a status symbol and commodity.

annette hollywood also responds with a music video in which she takes off into Berlin’s urban space, turning her back on the art space and studio in her own hip-hop manner with corresponding symbolism. For the video, hollywood performs rap in places where art as street art or other non-commercial presentations takes on a contrasting meaning and becomes an ideal space for experimentation and critical reflection. In her ‘response song’, hollywood negotiates the tension between art between commercialization and idealism, content-less staging and critical intervention, insignificance of wealth and the real precariousness of many artists, which often leads to self-exploitation, and as a field of unequal conditions of access and exclusion.

The video is a central component of a spatial installation developed especially for the gallery, which sees itself as a persiflage of the white cube event at the PACE Gallery in New York, with which Jay-Z sought to inscribe himself into the market-oriented art scene last year. With his video production, Jay-Z reacted to the performance The Artists Is Present by Marina Abramović at the MoMA. It can be read as a homage to Abramović’s work.

hollywood’s ironic taking up of the insignia of a white cube culture breaks with the very same one. By picking up and reinterpreting individual details – such as a highly professionally produced exhibition display, an oversized banner, photos with status symbols like a luxury limousine – she makes the exhibition operation visible as a form of staging. The reinterpretation of these elements, however, takes place in a contrasting DIY manner. On the one hand, this reflects the precarious production conditions with which the artist is constantly confronted and which she has to deal with artistically and self-confidently anew. On the other hand, it can also open up other spaces for action that deliberately undermine market-oriented instrumentalization and commercialization. At the same time, an attitude becomes clear: against a content-less, consumption-centered aesthetic and staging and for a creative, reflective, committed art production that finds a way to communicate despite adverse circumstances.

Another element of the production is a golden ring with the lettering ‘Bigasso’, which hollywood also centrally stages in her video. The ring is part of hollywood’s series Artist Name Rings (work in progress). It is based on the ring Pablo Bigasso, which was already made in 2007, and is being used in a new way in the current debate.
In a detective-like research corner as a further part of the installation, contexts of the creation and reception of Jay-Z’s performance art film are examined and their connections are shown. In the process, the imbalances between exploitation and benefit are also highlighted, for example when it is revealed that Jay-Z commercially uses “commons” freely available on the Internet for his production.

As in earlier works by the artist, who playfully adopts methods of hip hop and pop culture, in Bigasso Baby unquestioned sexist statements are disputed and confronted with the demand for a more feminist attitude. In addition, the mechanisms of the art system, especially the celebration of the art world as a star system and lifestyle choice as well as a market-centered understanding of art, are once again the focus of Hollywood’s critical scrutiny. Their explicit demand is: fair, exploitation-free payment of all cultural workers, instead of an absurd seeming overpayment of a few actors compared to a (self-)exploitative under- or non-payment of the majority. Thus the art context also becomes readable as a synonym of a progressively neoliberal working world.