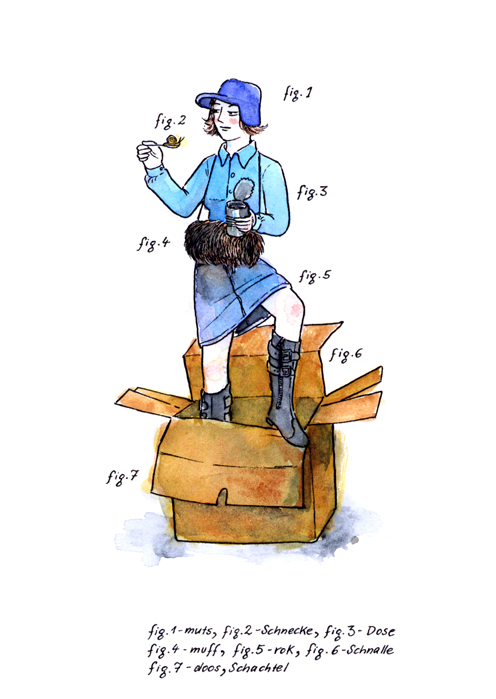 The obsession with comics brought the nine comic artists, who operate a trans-Atlantic comic blog under the name Chicks on Comics, together in 2008. And the desire “to gang up” with other women. Women who simply share that addiction to comics. Women have long been indispensable to the comic scene and are especially present in the young generation. However, the cliché and atmosphere of a male domain persists. Because of this, a comic collective that consists solely of women proves to be something special.

It is not only the fact that these artists work together, but above all, how they work together collaboratively. Chicks on Comics is a collective blog. Each week an artist blogs a comic, which another artist reacts to the following week with a new comic. In the collective process a stream of everyday, philosophical, experienced, and reflected narratives forms. This narrative stream is shaped by an non-hierarchal structure and the continuous interaction of the authors. The blog Chicks on Comics is a diary, but also more than that. A dialogue results through the combination of different perspectives, which are spun into a new red thread. Even though this working process allows the individual authors to appear with their individual signatures, a kind of collective author nonetheless emerges as a whole. And this collective author opposes the persistently masculine comic scene with a clear statement: another form of public sphere. It’s about empowerment, about networking women in the comic scene, and particularly as role models to encourage young comic artists to create their own spaces. For some years, women have been on the rise as bloggers. Whether individually or collectively, they have seized the medium as a form of publicness that is based on a dialogical principle. Chicks on Comics are the best example of the creative ways of dealing with this, which particularly foster collaborative work contexts. Not only can a foundational democratic approach be found in the form of their creative exchange and collective design, but also an underlying feminist principle. However, not every artist in Chicks on Comics identifies with this label. The women have different backgrounds, which influences their definition of feminism and their attitude towards it.

And what topics do the artists address in their comic posts? It is primarily about everyday stories and experiences, yet utopias and the illustrators own desires are also expressed here, becoming a space of identification for the reader as well. It is about work without boundaries and the precarious living situation as comic illustrators, about gender roles in the family, and homosexual experiences or about the meaning of “freedom” for the individual. And there are also topics that one would search for in vain in the otherwise male dominated field of comics – like menstrual cramps. In the exhibition, Chicks on Comics leave the digital space for the space of the art exhibition. Here, they meet each other for the first time in person in five years. Ample occasion to discuss the women’s different perspectives on their collaborative work as feminist practice in an artist talk, as well as their respective experiences as artists in the different comic scenes in Europe and South America.