Colleagues Wanted I. Superheroines and Visionary Associates for Everyday Challenges 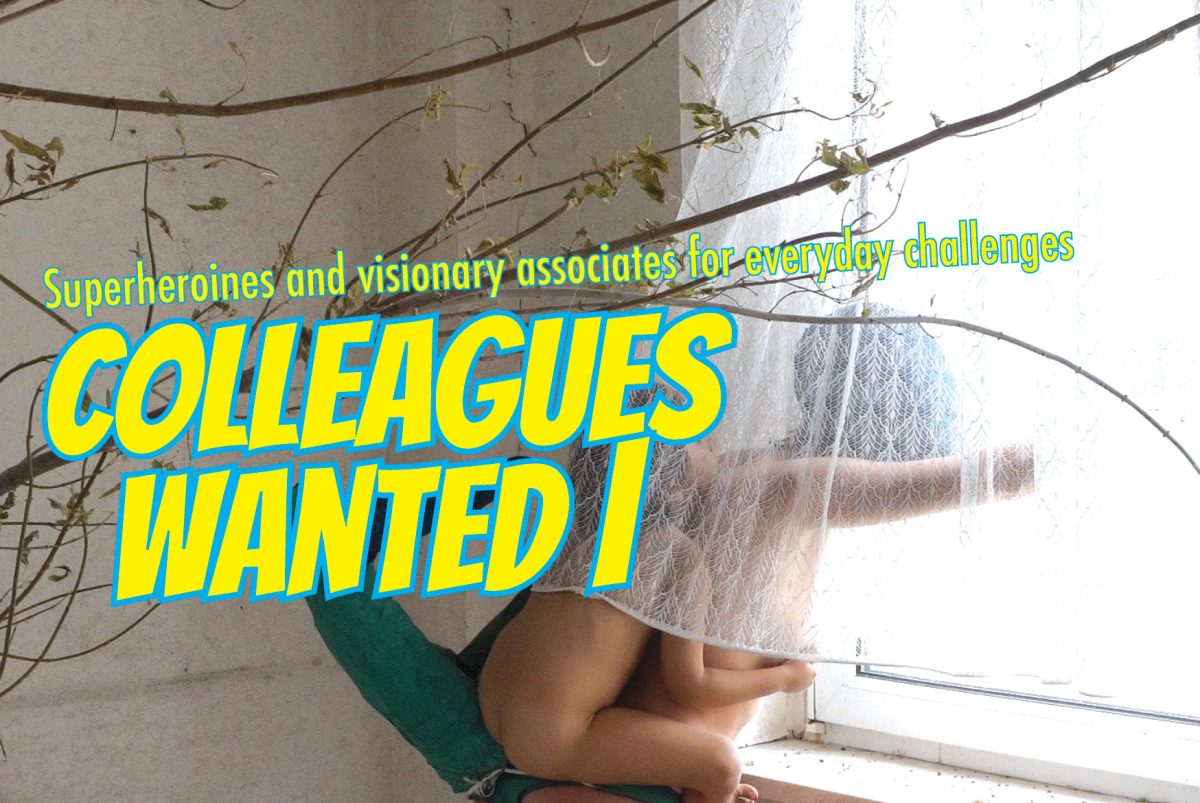 Superheroines — what makes them? How do characters, desires, and ideas change depending on the socio-political context of their creators? How do superheroines become role models in a world shaped by inequality?
Two consecutive exhibitions featuring photography, video, painting, comics, installation, and conceptual art pursue the potential of fictional characters and stories to unsettle normative and racist systems of knowledge and representation. Depending on the context they were created within, other realities are shown, specific needs and urgencies are brought into focus, and other conceptions of a “more just” present and future are formulated. What does it mean within this framework to adopt a feminist, decolonial perspective on (everyday)superheroines?
Much critical work has already been done on the superhero as the epitome of heteronormative, white masculinity. Instead of saving the world, female characters are often helpers or seductresses. Homosexuality is marginalized. A first glance shows a diversity that extends beyond this dominant “western” view: gender binaries and racist representations are frequently countered in often hidden stories. Dealing with the design of the superheroine also leads to concepts like that of the everyday heroine, who makes concrete references to reality, and question the heroic term as such.
As characters’ creators often become everyday heroines themselves in their respective creative environments in the male and white dominated world of art- and comic producers, Colleagues Wanted is dedicated to both the characters as well as the speaker positions and their backgrounds.
The exhibition brings local and transnational artists together. In times in which autocrats and right-wing populists are causing a furor, visionary counter-models are necessary. Therefore, the project also points towards the inherently empowering potential of the superheroine to engage in shaping the future.

In Colleagues Wanted I Morehshin Allahyari presents part of her long-term project “She Who Sees the Unknown,” a growing archive of dark goddesses, monstrous and evil female demonesses as well as other female mythological figures that originated in the Middle East. Allahyari translates their illustrations into three-dimensional computer graphics and creates new supernatural qualities for them and narratives that counter colonial history with a view towards the future. The animated computer graphics Huma (2016) and Ya’jooj Ma’jooj (2017) are on view at alpha nova & galerie future, as well as further materials from the archive.

Lydia Hamann and Kaj Osteroth relate the heroine-mythos to strategies of everyday life and self-preservation. Their painterly compositions correspond to a need that narration satisfies and both thematize their inspiring encounters, as well as the (im)possibilities of navigating everyday life with certain abilities. They ask themselves, what is a superpower? According to the artist duo, in times of fear and structural precarity, a superpower can be recognizing what we need and which buttons we need to push in order to get by. For them, these are often friendships, alliances, (ugly) feelings, admiration, solidarity, refusal, and their own cockpit. At alpha nova & galerie futura they will exhibit two new works that have been created especially for the exhibition.

The group Maternal Fantasies present a photo-text installation whose starting point is a collective writing session, as well as a series of staged photographic and moving images. The texts are composed of fragments of autobiographical-tinged writing that have arisen from grappling with motherhood, identity and representation, as well as with second wave feminist polemical pamphlets. The visual components recall tableaux vivants that are staged with varying numbers of group members and children. Artistic production appears here as collective experience. Outdated role models are countered by contemporary, processual alternatives developed through practical work.

Deena Mohamed has been drawing and publishing her webcomic Qahera on her blog since 2013. Qahera (translated: the vanquisher) is a Muslim superheroine who fights islamophobia, misogyny, and sexual harassment in the streets of Cairo and commits herself to women’s rights. The heroine in a hijab should explicitly counter the western stereotype of the devoted female Muslim. At alpha nova & galerie future Mohamed presents a selection of her heroine’s stories in both analog and digital format.