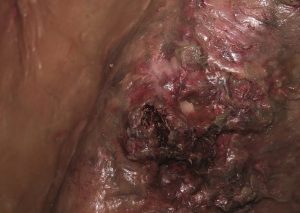 A disputed land absorbs its people into one homogeneous mass of flesh.
A wounded and conflicted body, it struggles continuously with its inherent contradictions:
Living tissue wrestles with history’s gangrenous narratives,
Individual voices cry out against a collective chorus,
Victim and victimiser interlock,
Becoming one tense muscle spasm.

The body simultaneously seeks separation and unification.
Clinging to the ground, it tries to soar.
Even its movements are neither here nor there:
Are they produced by external forces acting on an inert body,
Or is it the body itself convulsing in a desperate attempt
To free itself from a cycle of violence so old
It might as well be automated.