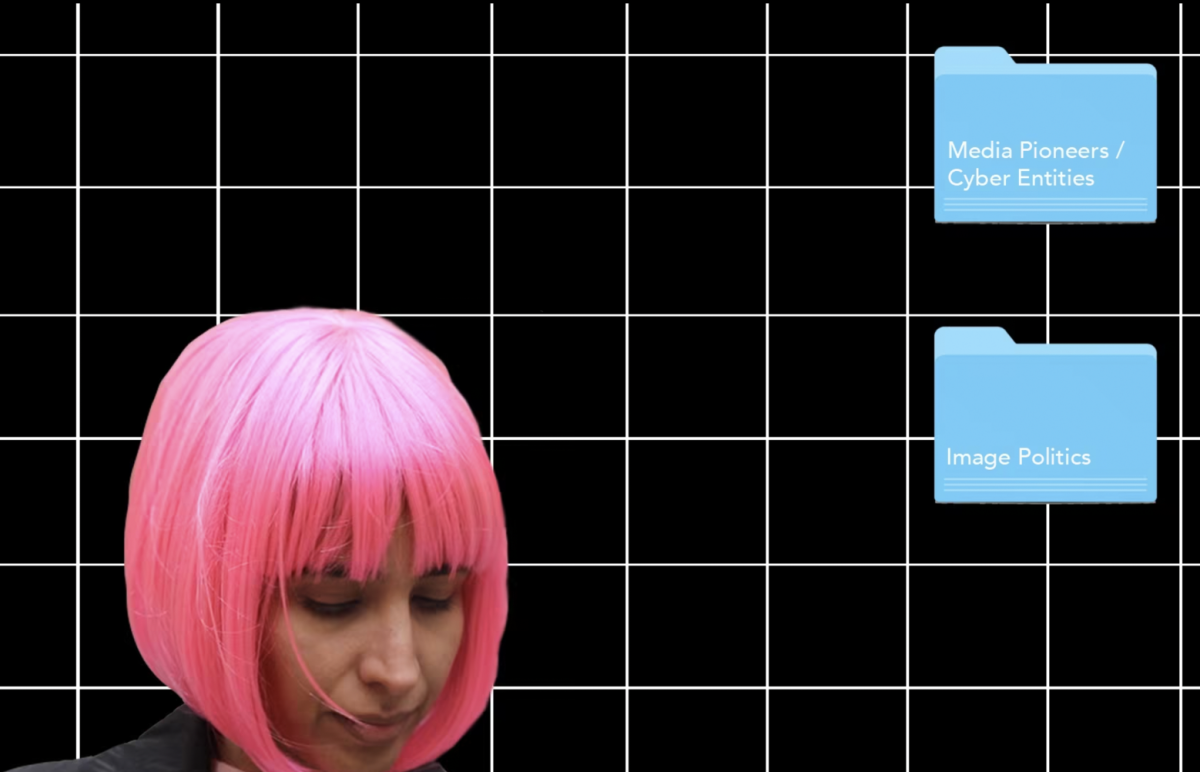 As part of the event series [Digital] Feminist Present Futures, we present in an hybrid event at alpha nova & galerie futura and via zoom the two video works/web projects feminism is a browser (2019-2020 ongoing) and the pattern thieves (2021) by filmmaker and artist Charlotte Eifler. In the following conversation with artist, media scientist and curator Claudia Reiche we want to explore the following questions: Where and how can the heirs or descendants of the cyberpunks and cyberfeminists of the 1980s and 1990s pick up in their practice today? Which existing utopias inspire current realities as well as visual practices and artistic practices?

feminism is a browser (2019-2020 ongoing)
A cyber entity connects with an international feminist network of media pioneers and questions the future of the internet. The fictional character Yeva is bored in their webspace Rosegarden. Raised on the internet, Yeva claims to be the child of the Network Faces. The Faces mailing list was founded in 1996 and it’s 300 members are living all over the globe. Yeva wants to meet their so called mothers and dives into a feminist revision of the internet.

the pattern thieves (2021)
The work presents the first chapter of a reseach into the origins and effects of grids in art, science and the military. How do patterns of dominance shape our bodies and actions?
Two thieves are in an ambiguous room, lights cast a security grid. Maybe they are stealing a Mondrian, maybe a hierarchical pattern, maybe they are just dancing tensely in the club. The logic of the grid is not only found in (colonial) geography, but also in digital evaluation systems. Diverse information about bodies, landscapes and situations are fed into binary systems to be classified. Once gridded, there is little space for processuality and ambiguity. The thieves in the video intend to create space for new disorder.

Dr. Claudia Reiche is an artist, media scientist and curator. She works on questions of mediality in fields of psychoanalysis, film, image cultures, and on cultures of the digital and their epistemological, aesthetic, and political effects, and is involved in female and queer projects that trace the borderlines of art and science, such as thealit Frauen.Kultur.Labor. Bremen.
She was core group member of the Old Boys Network (e.g. documenta x, hybrid workspace, Kassel, first cyberfeminist international). Most recently she administered the professorship for theory and history of contemporary media at Carl von Ossietzky University Oldenburg. Her solo exhibition HIJRA FANTASTIK, produced in collaboration with the Goethe Institute Bangalore in 2018, was on view at the Schwules Museum Berlin the same year.

This event is part of our ongoing series [Digital] Feminist Present Futures and takes part in the realm of transmediale and CTM’s Vorspiel.