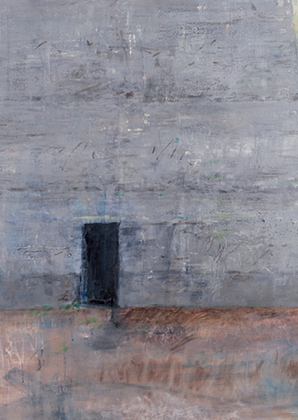 In her solo exhibition Geschichtete Orte [Layered Places], Mara Loytved-Hardegg weaves German and European history with biographical cornerstones and collective knowledge with personal experience. She thereby creates dynamic connections between the past and the present that point towards possible future scenarios. In the work series by the same name, Layered Places, the artist recontextualizes buildings, landscapes, and experiences with painting, photography, and video. In her painting and photographic works, traces and superimpositions of history and objects that witness different temporalities reveal themselves, which are at times distinct and other times nearly invisible.

She often creates menacing scenarios, as in series of bunker images entitled Tombstone for the German Dream and Monuments of Danger (in reference to Paul Virilio and his work Bunker Archeology (1975)). If Virilio’s bunker typologies inspired the aesthetic perspective of an entire generation regarding the shelters of the horrors of war, Mara Loytved-Hardegg commits to the painterly path of humanization. Both series, as well as her work Kriegslandschaft, are based on old black-and- white photos that she found in her father’s estate and used as inspiration for her paintings. Here, familial history directly connects with Germany’s National Socialist past, a daughter confronts her father’s generation, the generation of perpetrators: the (personal) relationships are complex, ambivalent and anything but black and white, just like the architectural remnants of this time. Thus, with paintings of places and buildings, she reminds us that knowing about these theaters of war makes these places what they are. This complexity and ambivalence appears in the works, in their vividness, abstraction, and superimpositions. Thus, the title of the exhibition, through its reference to historical processes that are layered on top of and within one another, becomes programmatic for the artist’s painting itself: layers construct the surfaces of her images, surfaces, that despite their dominating, reduced grey tones produce a vivid, multi-tonal quality. Mara Loytved-Hardegg’s painting simultaneously dissolves and clarifies at the same time. Therefore, it is often what lies beneath that comes to the fore. The covered spaces serve to draw attention towards the buried people. Anguish is present in all of her works because the infinity of the painted surfaces denies an end point.

The artist directly confronts the father-daughter relationship in two video works, in which she tells the story of her father’s participation in the Second World War as a German officer and reconnaissance pilot and confrontationally addresses him wearing a balaclava.

The series Geschichtete Orte refers to how history is never completed, but rather closely entangled with the present, determines it, and challenges it again and again. Loytved-Hardegg also takes up more recent history in her work, which elicits and makes visible ongoing violence and vulnerability. The menace is omnipresent – whether in the floor installation with photos of traces of the Berlin Wall, photos of the site of an NSU-murder, the triptych Stechlinsee with Decommissioned Nuclear Power Plant Rheinsberg, or the image of the Mediterranean Sea, which became a grave for so many who fled in hopes of a better life. In the triptych Stechlinsee, the color scheme and hanging creates a mood that oscillates between a night sky and atomic menace. The biographical confrontation with a war machine that operates in close range of the family also lies between attack and defense. Painting can oppose this: remembering and putting into perspective history that deterritorializes temporality and uses its own system of signs.

Loytved-Hardegg writes that these images “first become ‘guilty’ in our eyes when we view them through the lens of history and what could have happened there.” At the same time, some of them also witness from a place of hope and make space for other imaginaries, when the shown remnants of the wall are covered with cherry blossoms or if you allow yourself to discover the enigmatic in the bunkers – evoked through “nature, light, atmosphere, that feed on the hardness of the concrete, on the menacing innards.” (Dieter Hoffmann-Axthelm)