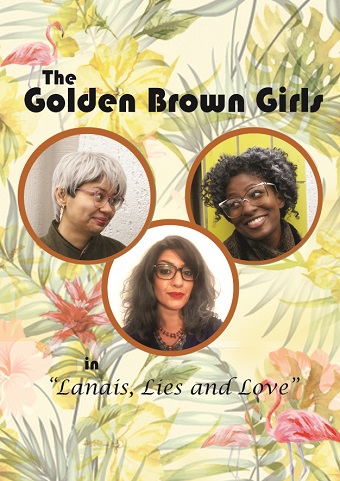 Palm tree décor, chaise lounges, gaudy fashion , and permed hair – the 1980s couldn’t – at least from today’s perspective – be presented in a more visually cliched manner than in the American sitcom The Golden Girls, in which four women over 50 live together in a shared apartment in Florida. Distanced from their previous existence as house-wives, wives, and mothers, they set alternative life goals, philosophize about god and the world and thereby negotiate critical social questions. The artist trio The Golden Brown Girls restage, parody, and transfer these associations with the exhibition Lanais, Lies and Love in another guise in an indefinite future.

The artists create an outdoor Florida setting through the recreation of a lanai in the Berlin gallery space. Three new, currently unpublished film episodes of the web series The Golden Brown Girls are presented, yet the décor also serves in particular as film set. This optically orients itself to the original sitcom The Golden Girls: tropical plants, photo wall paper, deck chairs, and television monitors. Since 2014, the Golden Brown Girls have produced the ongoing web series of the same name, in which the artists become the protagonists of their own film episodes. In doing so they take up themes that affect them as women of color active in the art field and exaggeratedly stage them: sometimes the focus is on posh-acting London and Berlin art scenes with their allure and mania for small talk, sometimes it’s about recognition and visibility as an artist, but also about family conflicts, having children, egg freezing, reproductive and body-questions, and of course — as in all real sitcoms —love affairs and jealousies don’t get a raw deal.

The contemporary artworld is determined by structural sexism and racism, which leads to exclusions, discrimination, and inequality. Black artists and artists of color are particularly affected by this. The Golden Brown Girls understand their project as socially and politically motivated, as they are explicitly invested in questions of representation, visibility, equality and breaking normative structures and perspectives, in order to make another future imaginable. In this sense the web series becomes a platform for the negotiation of identities, alternative life styles, and friendships, as well as practices of solidarity and self-empowerment. The web series develops a vision of the future, in which the protagonists present themselves as political actors and develop new social structures.

Slapping structural inequality in the face and laughing at it….

The Golden Brown Girls web series is a socially engaged art project, a political platform that re adjusts itself to new locations and collaborators and digital distribution. It is an homage to the American sitcom The Golden Girls where four women over 50 live together post divorces, children, dead husbands etc. to reinvigorate their sense of identity apart from these things. By creating a fulfilled, alternative space fuelled by mutual support, intimacy and laughter the artists transformed themselves into the protagonists of a newly created multiverse. This is a futurist Golden Girls.

The Golden Brown Girls project was founded in 2014 at Goldsmiths University of  London by visual artist Shannon Lewis in partnership with her colleague Indrani Ashe. Soon after they invited another artist and Goldsmiths graduate, Sara Umar and an  informal collective developed, with each iteration involving new participants. We envision this project as a social machine: a method of imagining our future, a stage for our political concerns, and a way to create new social structures with like minded  individuals.

The exhibition is part of VORSPIEL  in the frame of  CTM Festival 2017.