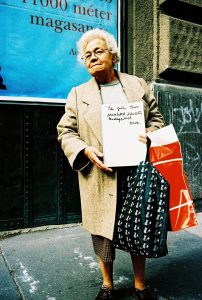 Beetles eat through old columns of Yiddish newspapers. Oma receives greetings from the “homeland” and forgets the words to her favorite songs.
A waiting room establishes a story that blends the fictive and the real. Video clips narrate realities that one didn’t expect. A document shredder devours histor(ies). Grass grows. Holes in memory. Memory lapses. Empty spaces.. Stuffed, moved to the side stage. Connected in parallel, brought into relation, contextualized.

The exhibition MIND THE GAP by the Swiss artist Elianna Renner shows works presented for the first time alongside selected works from the last years. Renner also introduces her newest interdisciplinary project Tracking the Traffic in a performative presentation, which follows the biographical traces of Jewish women who were trafficked as prostitutes around the world by human traffickers at the end of the 19th century. A focus of Renner’s artistic creation is the (auto)biographical work. Women’s stories are always at the center, often those that do not appear in the official historiography or only on the margins. A particular aspect is Renner’s confrontation with her own family history. As Jews persecuted during the Nazi era, many family members did not survive the Holocaust. A few, including Renner’s grandmother, were able to save themselves in Switzerland with the help of the Red Cross. Dealing with memory, commemoration, and storytelling is a common theme throughout the artist’s work. In the video installation Eintausendsechshundertfünfundachtzigstel (2010) she takes her knowledge of her grandmother’s deportation from Budapest to the Bergen-Belsen concentration camp and her rescue in Switzerland as a starting point in turn telling the story, which she only knows from the fragments that were shared with her, from her own perspective.

The artist presents her grandmother with conversations she has had with residents of the area in Budapest where her grandmother used to live. In a work created for the exhibition, which relates to Ein Eintausendsechshundertfünfundachtzigstel, the artist negotiates the empty spaces that her grandmother left behind shortly before death. Again, it is about dealing with memory and attempting to find an artistic narrative form for the empty spaces and breaks in a biography. The audio installation Wartezeit (2009) is also about fragmented, non-linear storytelling and passing on of personal and family histories. Fictive elements are connected with autobiographical, whereby the artist points towards the subjective element of every biographical (re)construction.

Astrolabium (2012) greets the visitor with illuminated crates that resemble model galaxies and are accompanied by an audio track. Upon closer examination, the remains of an archive of Yiddish newspaper columns can be seen in the crates, which show myriad holes in the archive eaten over the years by wood worms. The installation focuses the holes, which refer to the destruction of history in the archive. Data is saved in the archive. In many cases stories, memories, and life histories are missing. These holes in the archive are to be filled.

The current work Realities (2012-2014) is a collection of video portraits with women of different generations whom the artist met on her travels in Lithuania, South Africa, Germany, and the United States. They give short, fragmentary glimpses into the protagonists’ everyday lives and the environments.
In Realities, the artist devotes herself to the question of authenticity when telling her own story through the people she interviewed. This is immediately broken by the aesthetic and conceptual editing of the film materials and reveals the construction of the documentary narrative anew. Grass grows from the slit of a paper shredder and calming wave sounds can be heard.

o.T. (2014) refers to how some histor(ies) and experiences are erased from cultural memory – intentionally or also unconsciously. As a visual artist, Renner creates an aesthetic-visual access to a confrontation with oral history and history. Her aim is to make history(s) perceptible as constructions, which reconstitute themselves depending on the narrator. The artistic perspective and implementation allows her, unlike historians, to adopt an associative and playful approach to what she herself describes as “memory holes.” Scholars perpetually find themselves confronted with the question of how they can deal with the never-to-be-fulfilled truth claim of history. The artist seeks to expose these truth claims as illusory.

In her works she imagines, reassembles, and connects the fictive with the “real” and uses a variety of media to do so, such as film, photography, audio, text, sketches, and installation. She reminds us with her works that not only are personal memory processes inevitably patchy, but that cultural memory and official historiography cannot avoid producing gaps, which points towards to the construction of history(ies) in general. Individual and collective flow into one another, and through the empty gaps of history the lights of the forgotten shine. Through these holes means to glimpse: MIND THE GAP.