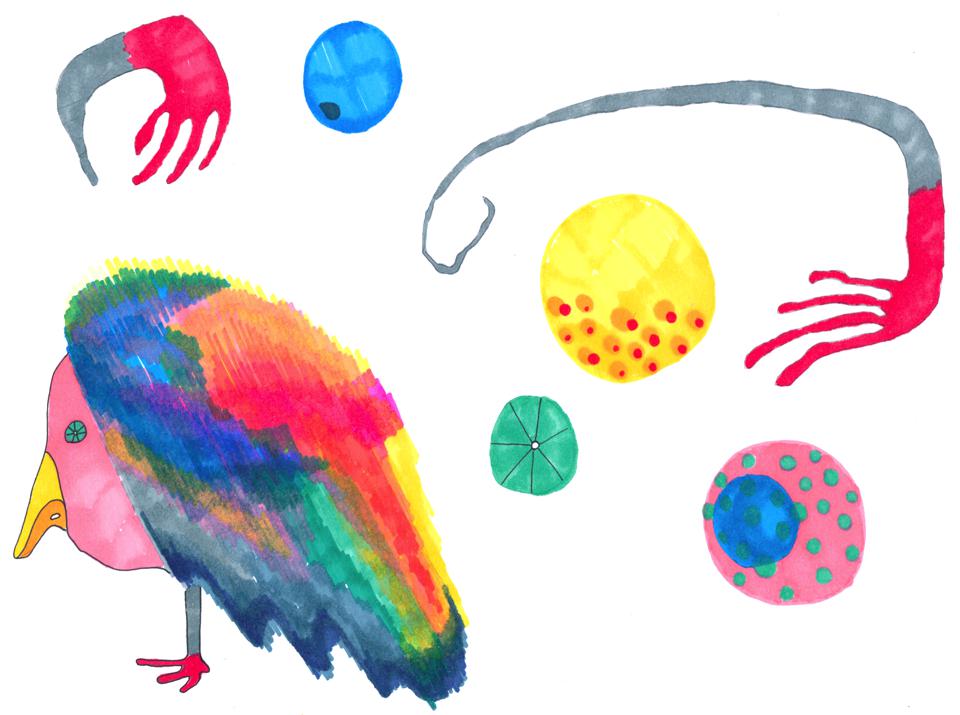 The exhibition is supported by: Artis Grant Program

Alma Alloro presents two work groups in her first solo exhibition in Berlin. Large-format textile quilts have a charged relationship with multiple video animations and come together as a multi-media spatial installation. A series of small-format drawings forms another element and materiality. The mixed wool and linen blends forbidden by Jewish law and Torah are called Shaatnez. The modern Hebrew definition of the word means mixture. Alloro makes multiple references to these ancient and modern interpretations. The artist mixes the patchwork fabric with other materials like video, animation, and drawing, connecting analog with digital, interweaving old and new works into new compositions and, in doing so, aims to continually cross boundaries.

Alloro crafts individual segments of her quilts, scans them, and sews the individual pieces together at the end into an entire piece. She simultaneously weaves the digital scans of the fabric into an animation, thus developing an entirely unique entanglement of analog and digital media that seamlessly determines the process. In doing so, she dissolves the staged difference between new media and craft. The resulting animations appear handmade and, conversely, the aesthetic of color charts and the flicker of the digital aesthetic influence the textile quilts.

Alma Alloro works intuitively, but nonetheless establishes clear rules of the game beforehand. So far, she first establishes clearly-defined segments, colors, and arrangements from which her patchworks develop. In contrast to earlier quilts, which were preceded by a precise calculation of pattern and arrangement of the individual fabric segments through a rigorous working process, in the exhibition Shaatnez Alloro devotes herself to a new textile work, which originates from the fabric remnants and seemingly superfluous elements of this earlier production. The unordered approach that accompanies this process is also new, thus freeing the artist from her earlier self-constraints and offering her the possibility to playfully experiment between the poles of restriction and intuition.

The quilts, products of meditative, manual precision-craftsmanship, don’t only refer to their relationships to screens and the history of media and animation through their chosen 4:3 proportions. These works, which are hung close to the wall, cross medial borders and move as if they were animated. Through their opposing, repetitive pattern they produce an almost hypnotic effect. At the same time, they are windows that expose the gaze to integrated knowledge transfer and cross-cultural aesthetics. A further aspect is Alloro’s confrontation with the relation between art and work, concretely the artistic creation as an often hard working process, which mostly remains invisible in the course of presenting the work. The exhibition explicitly refers to the close entanglement of strong conceptual work with the craftsmanlike production of quilt-making, which is traditionally associated with the feminine and is artistically marginalized. Alloro thereby thwarts dominant approaches in contemporary art that value the concept of an artwork more highly than its actual production.

The second work group comprises a series of drawings whose precision recalls the animation. The two series of geometric spatial drawings seem almost calculated by contrast. Alloro draws surfaces by means of rastered lines, which once again yields a video aesthetic. Three monitors are housed in a sculptural object made from cardboard, which spatially presents the quilt animations. Just as the fabric could build a space, the videos do so in turn – even if the movement is time-based here and no longer constructive.

Alloro’s works point to the fact that processes can be both linear and spatial and mutually dependent. They represent a concept of culture that searches for exchange and encounter rather than boundaries.