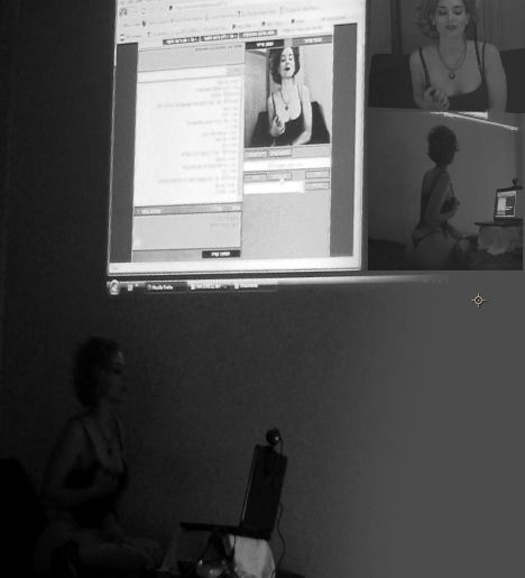 Watch Me Work addresses the not-easily-accessible subject of client-worker interactions within the sphere of cyber-generated sex work, and the positionality of the worker and the client within it.

Watch Me Work is an attempt to move beyond well-known-to-the-point-of-overused key phrases associated with sex work in the social sphere, such as “exploitative”, “misogynist”, “empowering women’s sexuality”, “immoral”, “exciting”, “dehumanizing”, “valid/invalid form of work” and present it at a more complex level by addressing the central element of sex work that cannot be reduced to stereotypes – the interaction between the sex worker and client.
The discussion around sex work and its legitimacy has taken center stage in recent weeks in the German media, and this performance serves to open an honest dialogue about it. The emphasis on the sex worker-client interaction in this performance comes as a reaction to the discourse about sex work, which evades addressing this central element, simply because it is inaccessible to the public eye and therefore – to public discourse. Through the use of technology, this performance seeks to de-exotify sex work, opting for a realistic perspective which investigates the discrepancy between the hyped discussion about sex work as compared to the actual sex work experience. In it, sex work is revealed through the singularities of the experiences it holds and a much more complex system than is conventionally addressed.

The performance will be translated into English, and will be followed by a discussion in English.

Liad Hussein Kantorowicz is a performance artist and activist from Israel-Palestine. She has worked on themes such as de-exotifying and de-mystifying the positions of those considered sexual or political deviants and by extension on minority rights, migration, anti-apartheid/anti-israeli occupation, queer issues and sex work. Her performances moved from the queer scene in Israel-Palestine and Berlin to bigger festivals and stages such as Transmediale and Ballhaus Ost. She is one of the founders of the first Middle-Eastern queer community and the first outed spokes person for sex workers’ rights in Israel. In Berlin she co-manages a peer project for migrant sex workers at Hydra e.V. She’s a perpetual migrant with a degree in Gender Studies and Middle East History.
www.liadland.wordpress.com

Kate Ehrhardt is a 3D animation and video artist who uses a camera, Maya, AfterFX, Quartz Composer and Resolume Avenue to create live and recorded motion graphics. She has a diploma in 3D graphics and video, and worked for a theatre company, as a set designer, a wardrobe manager and an actress. Kate lives in Berlin, and pushes the boundaries of art and technology.