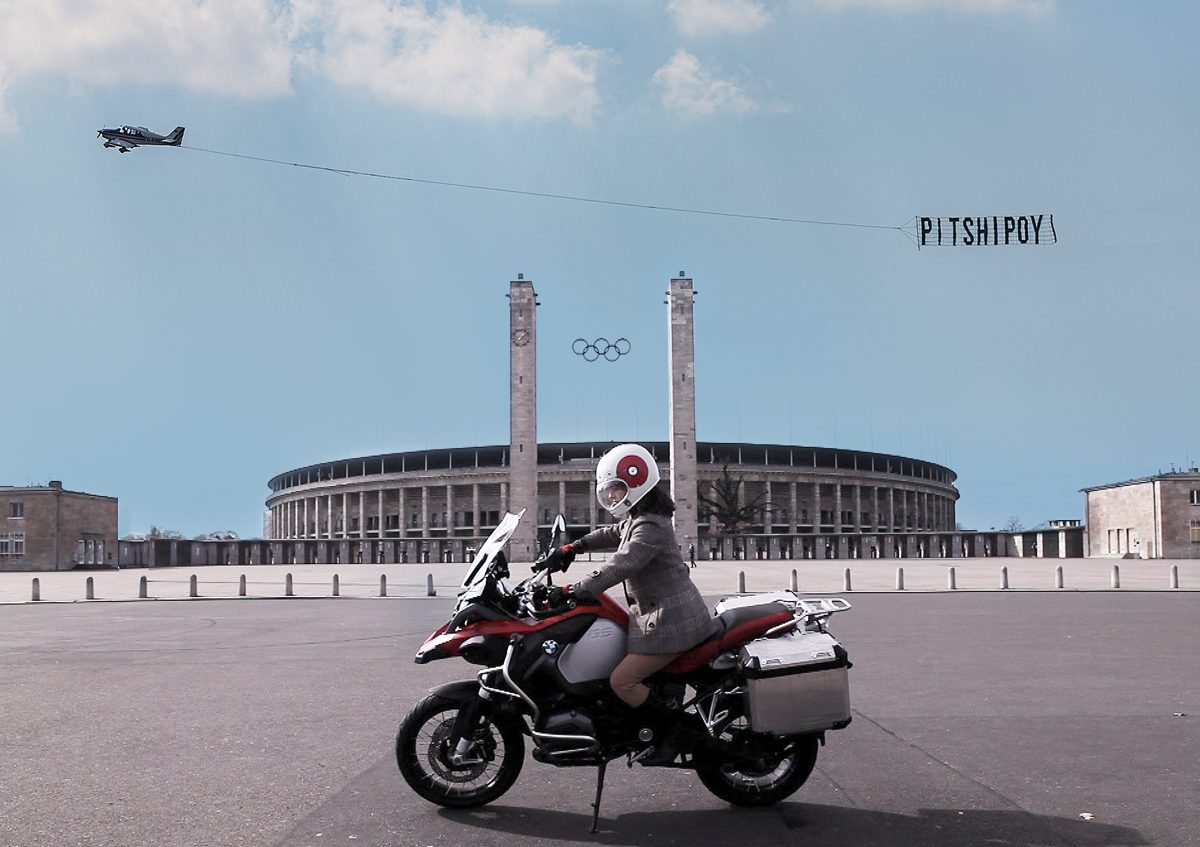 Fragmented Narratives shows two newly developed research-based works by Sharon Paz and Elianna Renner that comprise audio- and (interactive) video installation, as well as the presentation of materials. In their works, both artists deal with history and historical narrative and their omissions. These partially biographical approaches focus on Jewish history and anti-Semitism and racism, as well as the construction of history(ies) and memory in general.

Sharon Paz’s Dare to Dream is an interactive video installation that positions the viewer between reality and fiction. Based on research about the 1936 Olympic Games in Berlin, the work is dedicated to two women: the German-Jewish high jumper Gretel Bergmann and Leni Riefenstahl, producer of propaganda films during the Nazi era. Paz transfers their stories with fictional characters into the present. The visitor can actively participate in the development of different storylines through choosing different response options offered by the interactive video. This also raises the question of who has the hegemony over historiography and the culture of memory.

For the installation Pitshipoy, Elianna Renner followed the trail of the word Pitshipoy, which originated in Yiddish folklore and describes an imaginary space. The research grapples with the different histories, translations, and interpretations of the word. During the Shoah, Pitshipoy experienced the highpoint of its popularity in the transit camp Drancy in France. There, the term described an unknown and imaginary (safe)space that filled the vacuum of hope to the gates of Auschwitz. The installation combines text, film, and audio recordings that present fragments of the research on the term. The centerpiece is the video documentation of an air performance in which a pilot makes a banner with Pitshipoy appear in the sky above Berlin.

The works gesture towards how cultural memory and official historiography produce (un)avoidable gaps, which reveal the construction of history(ies) in general. Both works connect the real with the imaginary and refer to the power that this connection has over our unconscious. They function as times machines that collapse the past and present. In doing so, they create other narratives that elude clear attributions and transform the reception of the work into an active experience and questioning of one’s own perceptions and hegemonic narratives.

The exhibition makes doubts about fragile truths tangible when considered in light of increasing right-wing movements and conspiracy theories, which have been and will continue to be stoked through the Corona virus pandemic, as well as the experience of “Post-Truth” Politics. The exhibition therefore refers to the balancing act between a critical engagement with hegemonic narratives and the sensitive, but also emancipatory handling of the blank spaces in the writing of history on one hand and, on the other hand, the drift towards reactionary historical falsification undertaken by right-wing ideas, conspiracy theories, and myths.

30.10.2020 // 19:00
with
Dr. Lea Wohl von Haselberg (Media Scholar and Publicist)
Veronika Kracher (Publicist and Author)
Dr. Michal B. Ron (Art Historian and Researcher)
Dr. Ingrid Strobl (Author)
moderated by Sharon Adler (Publisher AVIVA-Berlin, photographer, Chairwoman of the Board of the Stiftung ZURKGEBEN. Foundation for the Promotion of Jewish Women in Art and Science)

Who remembers and who is remembered? And who has hegemony over the culture of history and memory? Pointing towards the empty spaces in the writing of history serves as an opportunity for emancipatory positions and marginalized narratives to attain visibility and recognition. But what happens when right-wing and reactionary forces create their own “new truths?” How can one practice critique of the status quo of the hegemonic politics of history and media coverage without drifting into fake news and conspiracy myths? The goal of this panel is to enable an interdisciplinary engagement with the politics of memory as reflected in racism and anti-Semitism, both historically and in the present, with fake new, conspiracy myths, and the fragility of hegemonic truths. How can art, culture, science, and media work against these right-wing and reactionary currents and simultaneously recognize the illusion of veracity and truth.

The number of visitors is limited to 30. Please register until 29.10.2020 via mail@alpha-nova-kulturwerkstatt.de. For those who cannot participate for various reasons: The panel will be recorded on video and will be available online.

Artist Talk (in German and English)

Sharon Paz (*1969, Ramat Gan, Israel) lives and works in Berlin. She received a MFA from Hunter College, NYC. Paz exhibited extensively in Weserburg Museum for Modern Art, Bremen, Germany, Smack Mellon in NYC, the Herzlyia Museum of Art and Petach-Tikva museum of Art in Israel. In the past her work was supported by the Senate of Cultural Affairs and Hauptstadtkulturfonds, Berlin, The Fund for Video Art and Experimental Cinema, CCA Tel- Aviv, Goethe Institute. Her video works are part of the collection of Neuer Berliner Kunstverein, Video-Forum Collection, Berlin and The Israel Museum, Jerusalem. Her work has been screened in numerous festivals and galleries such as Thomas Erben Gallery and Art in General in New York City; Transmediale 11 in Berlin.
www.sharonpaz.com

Visual artist Elianna Renner, born in Switzerland in 1977 and living in Germany, works at the interface of biography and history. In her works she questions historical narratives and their omissions – always with the aim of visualizing the power relations behind the forgotten or concealed. A focal point of Renner’s artistic practice is (auto)biographical work. Her focus is always on stories of women, often those that do not appear in official historiography at all or only marginally. Renner creates an aesthetic-visual approach to the examination of (oral) history. Her aim is to make the story(s) perceivable as constructions that are presented in a new way depending on the narrator. Scientists are constantly confronted with the question of how they can deal with the never-ending demand for truth in history. Renner seeks to expose this claim to truth as illusory. In her works she imagines, reassembles, links fiction with the “real” and uses a variety of artistic media such as film, photography, audio, text, sketches and installation. With her works she reminds us that not only personal memory processes are inevitably incomplete, but that cultural memory and official historiography also produce (in)avoidable gaps that refer to the construction of history(ies) in general.
www.eliannarenner.com

A Feminist Perspective for Berlin Today!