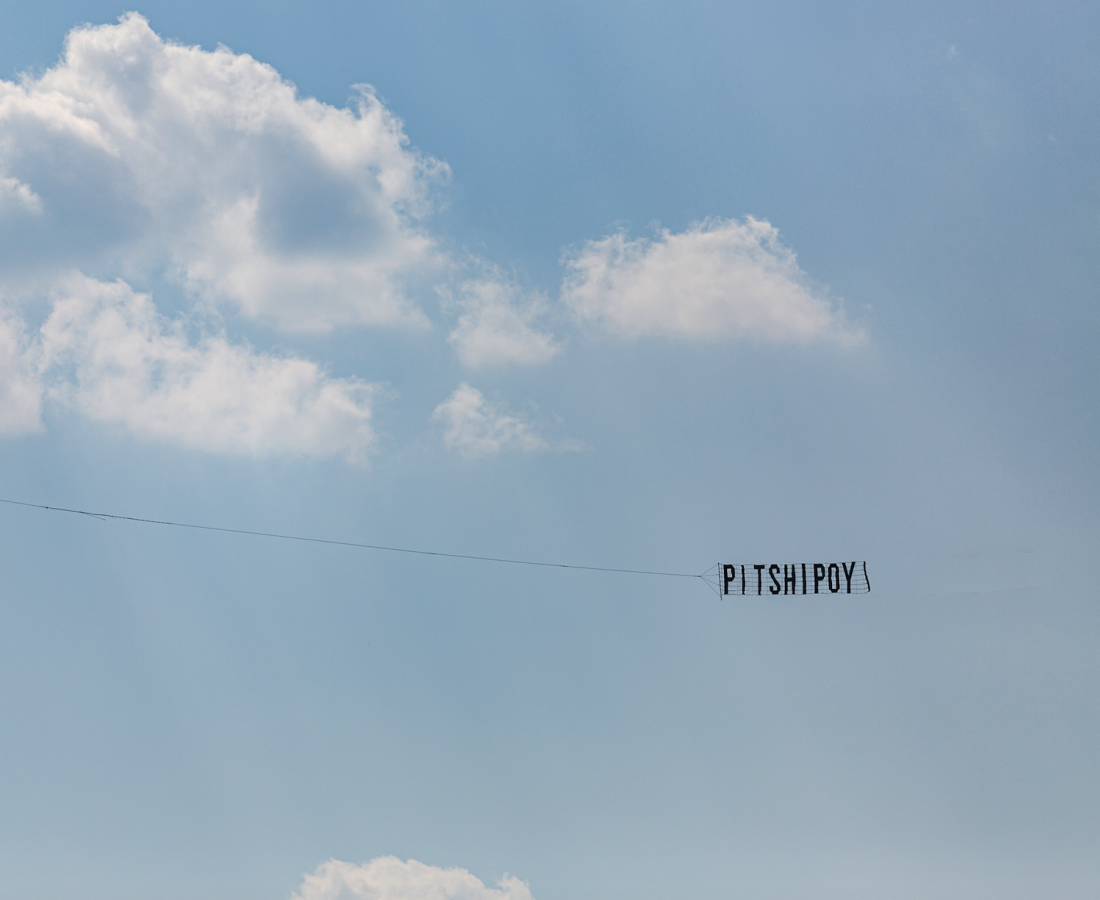 access road to Am Flutgraben, 12435 Berlin // in opposite of Schlesischer Busch

Performance by Elianna Renner as part of the exhibition “Fragmented Narratives”

In the multimedia research work Pitshipoy the artist Elianna Renner follows the traces of a Yiddish word. Gaps in historiography as well as the close links of a transnational history become visible through the study of Pitshipoy. Her artistic exploration commences with an air performance on 14.8.2020, in which Pitshipoy will appear in sky above Berlin.

Pitshipoy – a term from Yiddish folklore, is not only found in children’s songs, memories of a fictitious shtetl, or card games, but is also the name of a television series, a football club, a comic series, and a shipwreck. What these different usages share is that they always stand for something indeterminate, for an imaginary place. During the Shoah, Pitshipoy experienced the highpoint of its popularity in a small area in the transit camp Drancy in France. There, the term described an unknown and imaginary (safe)space that filled the vacuum of hope to the gates of Auschwitz. Little by little, it seeped into the collective consciousness of the prisoners at Drancy and became part of a collective memory. In her research, Elianna Renner grapples with the different histories, translations, and interpretations of the word. She deals with the term and its history in different artistic formats, approaching its various meanings and adding her own layer of interpretation.

During the air performance Pitshipoy’s different meanings become part of contemporary Berlin for a brief moment. A moment that both brings to mind memories and stories and also irritates us by confronting us with the (un)known. And who knows: perhaps the term Pitshipoy also migrated through the Berlin of the late 19th century, as Jewish migrants from Eastern Europe settled in the metropolis, often due to fear of pogroms in their homeland? The moment of confrontation with the term therefore brings not only the polyphony of history into our everyday life, but also simultaneously creates space for one’s own interpretations. Thus, once again, Pitshipoy becomes an imaginary place that connects past, present, and future.

Beginning 25.09.2020, the filmic documentation of the air performance will be the central work of the multi-part exhibition by the same name at alpha nova & galerie futura. Within the framework of the two-person exhibition “Fragmented Narratives,” by Sharon Paz and Elianna Renner, Renner’s research on Pitshipoy will be presented in fragments of text, film, and audio recordings. In doing so, she makes connections to her earlier works. These often (auto)biographical approaches focus on Jewish history and anti-Semitism and racism, as well as the construction of history(ies) and memories in general. Pitshipoy also points out that cultural memory and official historiography produce (in)avoidable gaps that make the construction of history(ies) visible.

Visual artist Elianna Renner, born in Switzerland in 1977 and living in Germany, works at the interface of biography and history. In her works she questions historical narratives and their omissions – always with the aim of visualizing the power relations behind the forgotten or concealed. A focal point of Renner’s artistic practice is (auto)biographical work. Her focus is always on stories of women, often those that do not appear in official historiography at all or only marginally. Renner creates an aesthetic-visual approach to the examination of (oral) history. Her aim is to make the story(s) perceivable as constructions that are presented in a new way depending on the narrator. Scientists are constantly confronted with the question of how they can deal with the never-ending demand for truth in history. Renner seeks to expose this claim to truth as illusory. In her works she imagines, reassembles, links fiction with the “real” and uses a variety of artistic media such as film, photography, audio, text, sketches and installation. With her works she reminds us that not only personal memory processes are inevitably incomplete, but that cultural memory and official historiography also produce (in)avoidable gaps that refer to the construction of history(ies) in general.
www.eliannarenner.com