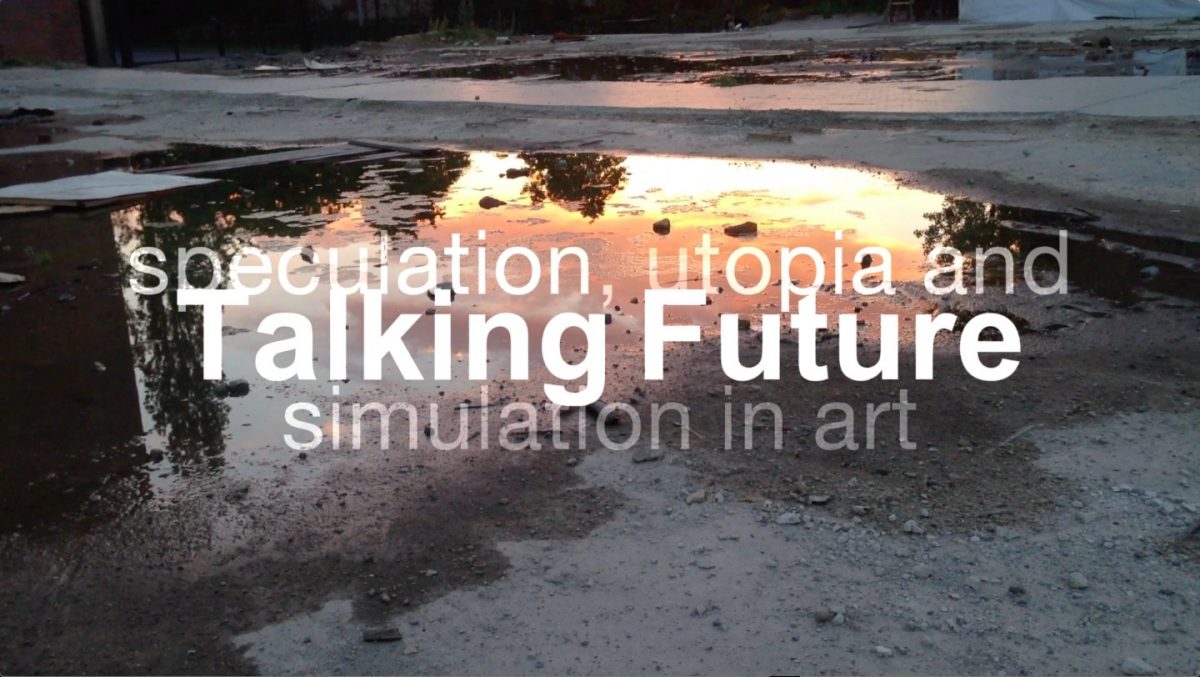 The event takes place in the frame of Zukunftsland 2099.

This conversation on speculation, utopia and simulation between future researcher and cultural worker Isabelle Vuong and the artists Valerian Blos, Mikala Hyldig Dal, and Gosia Lehmann both reflects and speculates on new categories of present and future times. In order to open paths to doing and undoing reality, mental models, imaginaries and artistic works about the future are presented, and give new insights into the present. The artists introduce how they work with utopia, simulacra and re-enactment to better understand the relations between reality and fiction, materiality and immateriality, between past, present and future.

With the metaphor of the “butterfly, which sets off a tornado”, chaos theory states that any minor change in the initial conditions of a complex system may lead to major differences in the future. This leaves us with only one possible conclusion: The future is wide open, it holds the fullest of the unknown. That the future cannot be known is because the present, like a billion butterflies, holds the potential of many different outcomes and paths of becoming. Also, it contains unknown realities, which are not graspable for the rational human mind. Future Studies speaks of these realities that have not yet solidified into significant, notable facts as “latents”.

Speculative methods are helpful to learn more about these. They require us to think in absolute terms, i. e. to expose ourselves to questions without grounding them rationally. Therefore, other than human beings – animals, plants, matter, things – are considered to be thinking in their own terms. When rationality is suspended, some of the complexity and creativity of natural and social processes becomes visible, and can be experienced. In this way, future speculation brings us closer to understanding (non) living entities and how change is a crucial part of those. Finally, by emphasizing that things could be otherwise, the speculative lens encourages to re-imagine the categories that constitute ‘reality’.

Isabelle Vuong is interested into changing how we think about the future. As the future has been enclosed and commodified through a goal-oriented approach, which hardly recognizes complexity and creativity for what they are, it is time to work instead with a concept of the future as open-ended “process in the making” (read framework). Anticipation, speculation and reframing strategies come along the way, and lead to surprising findings – about the present. This conversation is the first of a series labelled Talking Future that seeks to change our perception of the future, and with it open up new paths of individual and collective transformation.

Valerian Blos The times are changing, so do the disasters: shootings in schools, climate change or Brexit! The instabilities of the current times come from an undefinable black box of unforeseeable events, which are striking unexpectedly. Re-enactments or simulations are helping to co-operate? with those modern threats. They give us a framework of reference in which we learn certain behaviour and strategies. In his project ‘Disaster and Simulations’, Valerian caught this momentum and captured which kind of strategies exist to prepare for the unforeseeable. In order to achieve this, he visited places where emergency drills are performed and took an active role in these scenarios. In his contribution, he talks about our relationship to modern catastrophes and the role of simulacra/simulation, or the leaks between simulations and ‘reality’.

Mikala Hyldig Dal Rationality is certainly not the way to the future: Just as the Berliners of 1939 could not have imagined nowadays Berlin, one cannot know what the city will look like in 2099. In the exhibition Zukunftsland 2099, Mikala Hyldig Dal conjures this fundamental indeterminacy of the future by taking the visitors on a bus tour “Berlin Utopian Tours” 2099 along the discarded or marginalised community spaces of Kreuzberg. Slipping into the role of a tour guide, she offers a retrospective chronicle from a positive-visionary perspective through 80 years of a fictional urban history of Berlin. By performing it as another fragile story of the future, she invites to consider future potential in the present where one would not conventionally expect it.

Gosia Lehmann makes visible the fluid boundaries between fictional, factual and simulated, and thereby raises questions as to what is accepted as truth and authentic. Considering the present as a speculative reincarnation of the past, her work and research of recognizes the manifold relations among what we call the past, present and future.

Isabelle Vuong (Switzerland 1980) holds a degree in Humanities and in cultural management (University of Lausanne). After working as a freelance cultural journalist and as a producer for various independent companies, festivals and theatres, she managed the national dance organisation Reso – Dance Network Switzerland. She later moved to Berlin where she now studies Future Studies at the Free University and engages in various political and artistic activities.
www.isabellevuong.ch

Valerian Blos (Germany 1990) is a Berlin based designer and focus of his work is the creation of real and fictional artefacts, inspired by emerging technologies and scientific imagery. His practice is positioned within the boundaries of art, science, and design. By using design as a tool for critique and reflection, he explores the politics of technology and its social implications. In February 2018, he finished his M.A. (Visual Communication, New Media) at the Berlin University of Arts.
www.valerian-blos.de

Mikala Hyldig Dal (Denmark 1979) is an artist, curator and author based in Berlin. She is the initiator and one of the curators of Zukunftsland 2099. She has studied Media Art at the Universität der Künste Berlin. She has initiated the research project „Images of Transition” on visual politics in the Arab Spring (published by Transcript Verlag/Columbia University Press 2013). She has also co-curated the exhibition project Eurozentrika – Visuelle Migrationen on gender and migration in Europe (2009-2011, Lab for electronic Art and Performance and University of the Arts, Berlin)
Her practice can be described as “artistic research” and connects artistic interventions with political discourse. Many of her works are video-based installations, but also performance and drawing belong to her artistic practices. She has exhibited e.g. at Martin Gropius Bau Berlin, Townhouse Gallery Cairo, Nikolaj Kunsthal Copenhagen, Fluxfactory New York and Azad Gallery Tehran.
www.cargocollective.com/mikala-hyldig-dal

Gosia Lehmann (Poland 1992) is a Berlin based artist and filmmaker whose works examine the topics of memory and materiality in technological context. Referring to filmmaking tradition she explores the boundaries between reality and fiction. She is interested in creating participatory experiences and developing alternative approaches to exhibition formats and art production. Gosia studied at Central Saint Martins in London, Tama Art University Tokyo and Berlin University of Arts. She’s a founder and member of an artist network Lagoon Parliament.
www.gosialehmann.net