The Body of Trauma 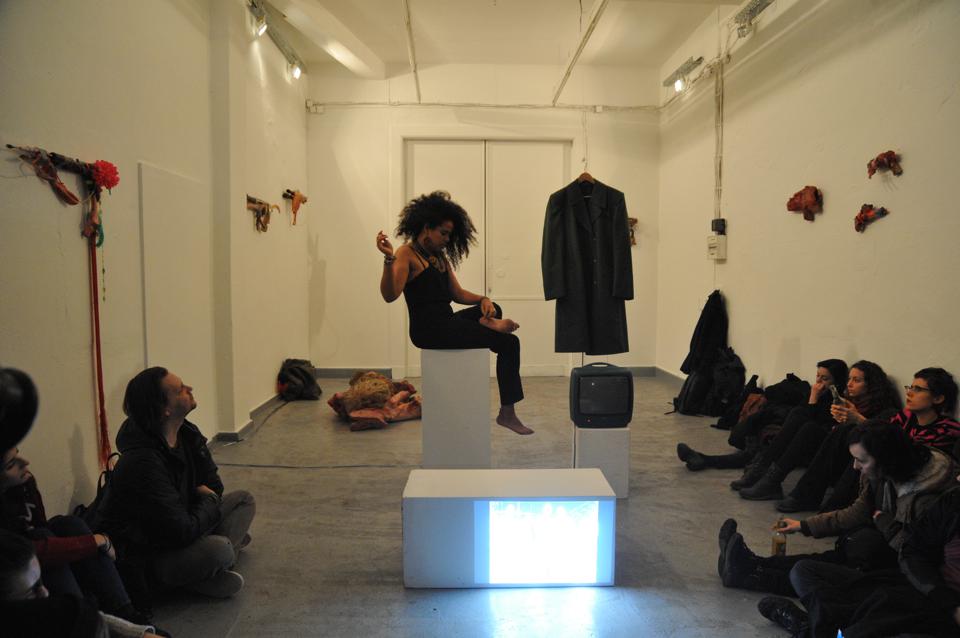 Inextinguishable Fires points to the ethical-forensic dilemma of the documentary image and of scientific accounting of a crime, whose main feature is the very erasure of victims, voices and traces. Through image, text, voice – and the tension and blind spots between these – this piece discusses the epistemology of the absent image in memory-work and transnational and intergenerational solidarity with “comfort women”, girls and women from the colonies forced into sexual slavery by the Japanese military during World War II. Witnessing, and the telling of this trauma is necessary for advocacy and legal proceedings towards justice and against revisionism, but are further complicated by the latent violence in the images and their complicity in the crime – in the recording, distribution and the interpellation of viewers.

The performance is a visual narrative exploring the history of Germany’s colonial past of 1889-1945 and its impact to present memory. The artist investigates her own biography as a descendant of African POW’s in German camps in WWI introducing her great-grandfather’s experience in the labor camp in north Gabon. The narrative challenges the visibility and invisibility of Afro-German and African Diaspora women during the WWI & WWII and their role as founders of human rights movements. This invisibility is transformed through sound archive memories in prayer, song and story-telling through the voices of sons, husbands and fathers prisoners in colonial camps in Germany to declare emancipation and talking of the presence of the women as a form of resistance. The work acts as a testimony to the invisible war fought by the German, French and British colonies through the experience of African diaspora and questions the position of arriving to post-colonial discourse.

ExDress is a series of interactive performances and public interventions. The artists, Sanija Kulenovic and Adi Liraz, are commemorating their personal and collective memories and their Muslim and Jewish heritage by connecting themselves through two dresses that are changing, dissolving and (re) attaching during the course of the performance. In “The Body of Trauma” the artists are connecting themselves to the history of the women in Bosnia, Rwanda, Democratic Republic of Congo and elsewhere, who have experienced sexual violence as a tactic of war to humiliate, dominate, and instil fear in their communities and ethnic groups, and who on many occasions gave birth to children as a result of rape.

Sexual violence during wartime leads to long-lasting trauma and suffering. Designed not only to inflict bodily harm but also to terrify women and girls, humiliate them, their families and their communities, the legacy of sexual violence includes a mass of physical and psychological trauma – many of which persist for decades and have often intergenerational impact. As such, it is not a temporary aberration or a one-off assault on an individual but a broad and systematic tactic that is mobilized against vast numbers of women and used to subdue entire populations. Yet, patterns of sexual violence are not only an instrument to harm a community but a crime against women as women. Many stories and voices of survivors of sexual violence have never become part of our collective memory, never formed part of a wider public and cultural narrative and have therefore never been able to become visible as part of our public consciousness. In this sense, the artists in the exhibition Wounderland and the event Body of Trauma, retell the history of women who have experienced sexual violence and sexual trauma during war. In the exhibition’s closing event Body of Trauma, which includes a screening, performance and artist talk, the artists provide a voice to some of the untold stories by relating to the traumatic experience of women during war through tools and motives like femininity, hand crafts and maternity. Through these tools, the artists tell the story of Japanese and Korean comfort women who were women and girls forced into sexual slavery by the Imperial Japanese Army and coerced into playing the role of sexual conscripts for the Japanese Army during WWII; the story and memories of the abuse suffered by Afro-German and African Diaspora women during the WWI & WWII, the story of Bosnian women who suffered systematic mass rape and experienced forced pregnancy as part of the Serbian genocidal ethnic cleansing policy during the Yugoslavian civil war; the story of Jewish women who were raped and abused in the occupied villages and cities during WWII. In the event, Moran Sanderovich’s work will be accompanied by the artists Nathalie Mba Bikoro, Adi Liraz, and Nine Yamamoto-Masson as well as a short lecture by Sanija Kolenovich on “Transitional justice as a vital condition for trauma processing in post-conflict societies.” The participants engage critically with the cultural amnesia resulting in the erasure of victims and their voices, the complexity of the binary identities of perpetrator vs victim, the body of women used for collective punishment, as well as the meaning of the societal role of women as child bearers in dealing with sexual violence and trauma. (Armeghan Taheri with Adi Liraz, November 2015)

The event takes place in the frame of the exhibition Wounderland by Moran Sanderovich.