Revolt She Said – decolonial and feminists perspectives on 68 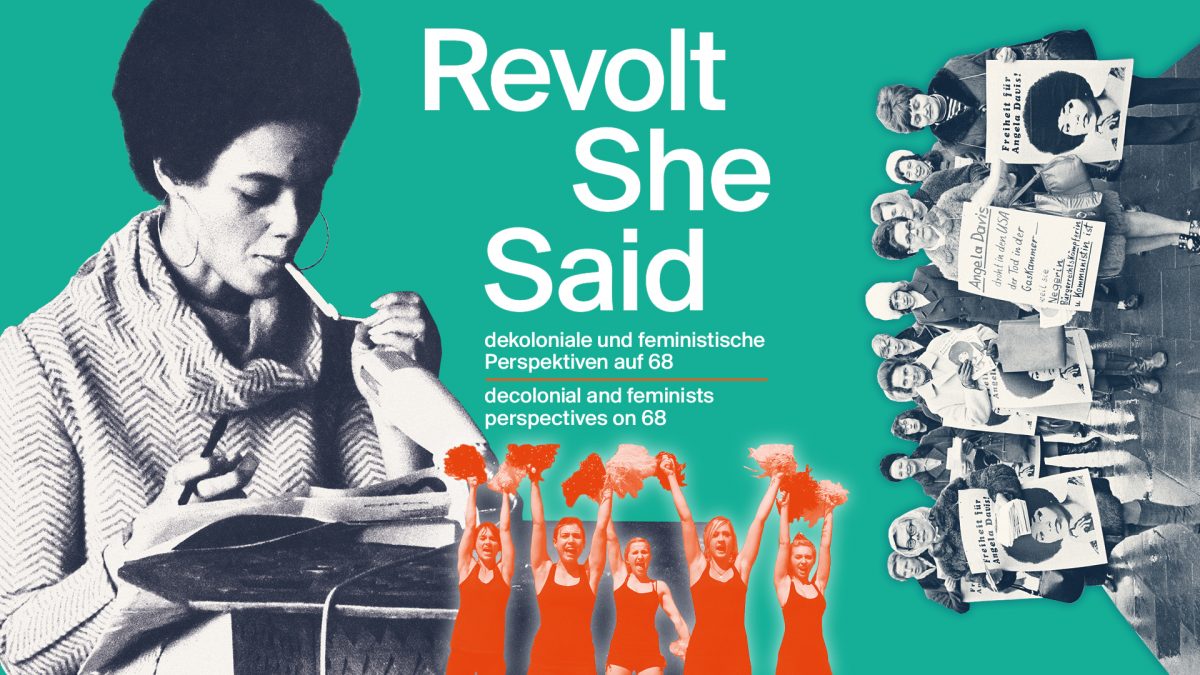 On the occasion of the 50th anniversary of 1968, we (alpha nova & galerie futura and District Berlin) have taken the opportunity to engage from feminist and decolonial perspectives with the protest movements in Germany in the 1960s, which also fully redefined the field of art. We are moved by the question of which histories, participants, and voices still remain invisible within the dominant narratives about 1968 and how they can be reactualized for the contemplation and creation of present and future socio-political processes and demands. With a series of events entitled Revolt She Said, we seek to reassess the production of narratives and historiography and to (re)tell the movements of this time from the perspective of their feminist, anti-colonial, diasporic, migrant, Jewish, and Black organizations. Diverse formats open the project up to a broad, inter-generational public and offer possibilities to learn about historical contexts, marginalized knowledge production and current cultures of remembrance. Furthermore, the lecture performance, lecture, film screening, conversation, workshop, and walk, invite all participants to actively take part in creating new narratives of 68.

“It is a history of an unrecoverable past; it is a narrative of what might have been or could have been; it is a history written with and against the archive.”
– Saidiya Hartman, Venus in Two Acts

To decolonize 1968, we have to decolonize the archive. The task of decolonizing the archive is made all the more difficult when we are not allowed to enter them. Intersectional artists use creative tactics to access documents, film reels, and correspondence that their eyes were never meant to see. We role play, accept spurious collaborations, and send allies on faith to hold the door ajar. The detective work involved in excavating our stories is exhausting labor. Consumers of art who are not ready to be critical of our colonial past may scrutinize the fruits of these endeavor because they exist from a perceived trespass. We persevere because often the means of decolonizing the archive are often more sustainable than the ends. Karina Griffith sits down with Nathalie Anguezomo Mba Bikoro, and Natasha Kelly to discuss how they created new points of entry into German history through their artistic practices.

Talking Blues links the tradition of female blues with the history of black feminists, like Angela Davis, whose political influence was unmistakable in divided Germany. Kelly and Kwami translate the roles of black students in (East and West) Germany in the 1960s into a blues lecture performance that deconstructs white narratives of constitutive moments for the federal republic and (re)tells and makes audible perspectives of the anti-colonial, diasporic-feminist and Black organizations that were active at this time.

Anti-colonial (liberation)movements and their demands for independence, self-determination, and against colonialism and racism decisively shaped the protest and resistance movements in the Federal Republic of Germany. They were directly related to the struggle for the social equality of men and women, as well as the protection of ethnic minorities. In this workshop, through historical materials from newspapers, publications, and other ephemera, a mapping of the discourse of the relationship between sexual self-determination and anti-colonial (liberation)movements at that time will be created and the question of the emancipatory concepts negotiated therein will be pursued.

Feminist art from 1968 can be defined more precisely not only in terms of its thematic discussions, but also in particular through a new appropriation of media and materials. The emergence of a specifically recognizable aesthetic and expression has also been created by a new self-consciousness, to update materials with a female connotation in the production of art, and to use the female body as the primary medium of self-determination. The round table discussion examines how the concrete entanglement of materiality and media is related to the content and interpretations of feminist art production.

This series of (artistic) presentations and an intergenerational round table conversation devotes itself to the perspectives and experiences of Jewish feminists, artists, and cultural workers, who were active in 1968 and afterwards—and who met in a climate that was, also in the left, partially characterized by anti-Semitism, or at the very least was anti-Israeli. To this end, an arc will be drawn into the present in order to find out how Jewish artists and intellectuals position themselves today and which experiences were/are made in different time and social contexts.

Registration until 31.10.: info@stiftung-zurueckgeben.de
In cooperation with Stiftung ZURÜCKGEBEN – Promotion of Jewish Women in Art and Scholarship

A walk with the artist Prof. Azade Köker to the projects Menschenlandschaft and Cuvrybrunnen, created in the 1980s, is intended to commemorate the artistic and local history of the group of sculptures. At Schlesisches Tor, eight artists enlivened the then barren terrain. Both projects contain stories of the political, artistic, and intercultural coexistence that was specific to Kreuzberg, yet today are largely forgotten. A moderated conversation follows with Azade Köker, Prof. Dr. Stefanie Endlich, and Robert Schmidt-Matt – significant participants in the Kreuzberg art scene.

Revolt She Felt.
Film(s) and conversation with Karina Griffith (Artist, Curator and Filmmaker). The filmmaker Claudia von Alemann will also be present for the talk.

In her book Ugly Feelings, Sianne Ngai introduces irritation as an affect of restrained rage. This film program explores how profound irritation, stripped of its ambiguity, was an agent for political change in the film works made in and around 1968 and thereafter. The anchor of this program is the film KATHLEEN UND ELDRIDGE CLEAVER IN ALGIER. Here the two activists develop their ideas about resistance at the Black Panther Party office they formed while in exile in Algiers. Filmed by feminist filmmaker Claudia von Alemann in January 1970, the Cleavers speak through clenched teeth about their political fight, linking it to West German policies. Irritation subverts the stereotypes of the „angry black woman“ or the „hysterical housewife“ to present a more palatable position of prolonged annoyance. Employed in moving image works, the feminist approach of translating anger into irritation is an effective and affective strategy for provoking friction, discourse and an engagement with revolutionary demands.

Presentation of the latest issue of 1968ff – Art, Feminism, Politics, the magazine for gender research and visual culture. It addresses the history of the publication as a feminist revision and connection to 1968, as well as a concrete example: queer-feminist art criticism before, during, and after 1968, which makes it possible to see that 1968 is not so 68 and post-minimalism is not so post as it initially seems.

On September 24, 2014, 43 students from the Ayotzinapa Teachers’ School were kidnapped as they were going to Iguala to protest the discrepancies in school funding by the government; the kidnapping was a collaboration between the state and the mafia. The students planned to continue to Mexico City for the commemoration of the 1968 Tlatelolco Massacre during which 300 people had been killed in the run-up to the Summer Olympics in Mexico City. Pınar Öğrenci went to Mexico City at the beginning of 2015 for the De Las Fronteras Biennial and the R.A.T. artist’s residency program. She swept jacaranda flowers on avenues which are important sites for Mexico City’s collective memory of the students of Ayotzinapa. The final part of her performance Purple Panic: 43 was realized exactly six months after the disappearance on Tlatelolco Square. The relationship between the disappearance or kidnapping in 2014 and the 1968 Tlatelolco Massacre is a striking example of the repetition of the cycles of state violence. This repetition can be related to seasons, symbolized in the jacaranda flower.

Revolt She Said is a cooperation by alpha nova & galerie futura and District Berlin.